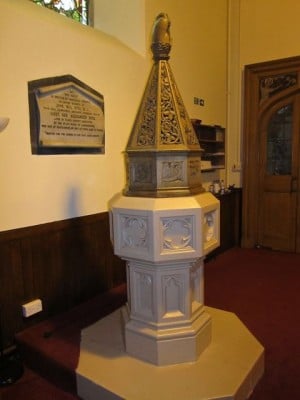 The symbolism of the Font Cover

Pelican:  At the very top is a pelican and its young chicks in its nest.  The pelican was once believed to peck its breast with its beak to nourish its young  with its own blood.  The bird was therefore used to represent Christ’s self sacrifice for humankind and as a symbol of charity (caritas).

The vine and grapes:  Widely cultivated in the Holy Land these became a symbol of the Hebrew people as grapes were abundant and characteristic of the Promised Land.  Grapes were made into wine which was an everyday drink for people in the Middle East.  Jesus often used vines to illustrate His parables and sayings.

Pomegranates:  The round pomegranate fruit is still grown widely in the Holy Land and featured in the Old Testament where it was embroidered onto the hem of the priest’s robes and ornamented the pillars in King Solomon’s temple.  It is a sign of good harvests and plenty to eat.  It was also adopted as a symbol of the resurrection.  The Christ Child is often painted by old masters like Botticelli holding a pomegranate fruit.

The Thistle:  The thistle panel locates this carved font cover firmly in Scotland for it depicts the national flower of this country.

The Rose:  In Christianity the petals of this flower were taken to represent the five wounds of Christ: a red rose for the Christian Martyrs; and a white rose for Mary mother of Jesus.  Saints and Angels often hold roses as an indication of heavenly bliss.

The base panels featuring Christ and the four Gospels:

Winged Lion:  This is St Mark as a winged lion.  The winged lion is an emblem of Venice where St Mark’s relics are interred.  The lion shows Christ’s divine majesty.

I H S:  This emblem is derived from the first letters of Jesus Christ’s name in Greek and consequently symbolises God the Son.  This is often shown on a heraldic shield.

The Lamb and flag:  In art, the lamb symbolises Christ who was sacrificed to redeem us and became like the paschal lamb traditionally sacrificed on the first day of the Jewish Passover.  As the Lamb of God (Agnus Dei) the lamb often carries the flag of victory.

An Eagle:  An eagle represents St John the evangelist maybe suggesting a symbolic link between his spiritually uplifting gospel and Christ’s Ascension.

The winged Ox:  The winged Ox represents St Luke.  It is thought that the ox was chosen as this evangelist’s symbol because it was a sacrificial animal in ancient times, and Luke’s account dwells on the sacrificial aspects of Christ’s death.

Trefoil with triangle:  The trefoil shows the divine three-in-one; God the Father the Son and the Holy Spirit – the Holy Trinity.  The triangle also has the same meaning. 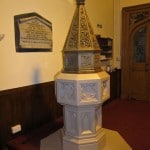 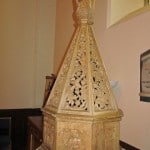 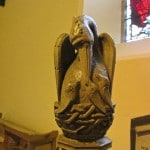 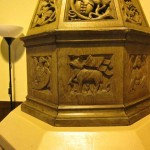 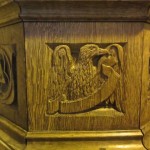